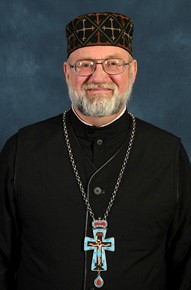 Father Mark was born at the National Naval Medical Center in Bethesda Maryland, where both his father and mother were serving while in the U.S. Navy.  He was baptized at the chapel there and grew up attending Presbyterian churches.

In June 1976, he was chrismated into the Orthodox Church at St. Mark parish in Bethesda, Maryland.  He sang in the choir and served as a reader.  He received a Bachelor’s of Arts degree in History from the University of Maryland, College Park in 1979.

He married Janet Cunningham at St. Mark’s parish in August 1979.  He attended St. Vladimir’s Theological Seminary in Crestwood, New York and received a Master’s of Divinity in 1982.

Ordained to the Holy Deaconate in January 1981 at St. Mark’s parish, Father Mark served as a deacon at the Military Academy West Point and Assumption Orthodox parish in Clifton, New Jersey.

In July 1982, he and Jan moved to California and served at Annunciation Orthodox parish in Santa Maria, California until January 1986.  He was ordained to the Holy Priesthood there in February 1984.

He served as an assistant rector of St. Nicholas’s parish in Saratoga, California and as a mission priest for three mission stations in the central valley of California from January 1986 to June 1987.

He was commissioned as an active duty chaplain in the U.S. Navy in June 1987.  He was stationed at numerous shore duty units as the Orthodox Chaplain including Deputy Command Chaplain National Naval Medical Center in Bethesda, Maryland and Naval Air Station Oceana in Virginia Beach, Virginia.

Father Mark retired from the Navy in July 2007 after almost twenty-two years of service in the military.

He was attached to St. Mark’s parish and served as a supply priest for Orthodox parishes from Washington to Philadelphia.  He is the Chairman of the Mission Board of the Archdiocese of Washington, the Clergy Representative for the Archdiocesan Auditing Committee and a member of the Diocesan Benefactors Fund.

His church awards include Archpriest awarded in 1999 at St. Michael’s Cathedral in Sitka, Alaska and Jeweled Cross awarded in 2010.

During his time in the military, Father Mark visited Romania (where he attended the renewal of the Romanian military Chaplain Corps and met with Patriarch TEOCTIST), Lithuania, Latvia, Estonia, Greece, Turkey and the country of Georgia (where he met and served with Patriarch ILIA II).

Father Mark has worked for the past eight years as a substitute schoolteacher in New Castle county public schools and since March 2015 as a resource chaplain for Season Hospice of Delaware.

Monthly Panikhida: 1st Sunday of the Month (after Divine Liturgy)

Bible Study: 2nd Tuesday of the Month (In-Person and Zoom)

We are now on Amazon Smile!

Anyone who is purchasing from Amazon, please support our parish.

Amazon will donate 0.5% of the price of your purchase.

Thank you for all your support!

The Mission of The Orthodox Church in America, the local autocephalous Orthodox Christian Church, is to be faithful in fulfilling the commandment of Christ to “Go into all the world and make disciples of all nations, baptizing them in the name of the Father, and of the Son and of the Holy Spirit…”

Holy Assumption Orthodox Church is part of the Diocese of Eastern Pennsylvania, which is presided over by The Most Reverend Mark (Maymon), Archbishop of Philadelphia and Eastern Pennsylvania. Our mission is bringing the joy of Christ's resurrection to those who have never heard the Good News, and to strengthen and encourage the faithful who reside within Philadelphia and the local area.

The Holy Scripture is a collection of books written over multiple centuries by those inspired by God to do so. It is the primary witness to the Orthodox Christian faith, within Holy Tradition and often described as its highest point. It was written by the prophets and apostles in human language, inspired by the Holy Spirit, and collected, edited, and canonized by the Church.

Holiness or sainthood is a gift (charisma) given by God to man, through the Holy Spirit. Man's effort to become a participant in the life of divine holiness is indispensable, but sanctification itself is the work of the Holy Trinity, especially through the sanctifying power of Jesus Christ, who was incarnate, suffered crucifixion, and rose from the dead, in order to lead us to the life of holiness, through the communion with the Holy Spirit.