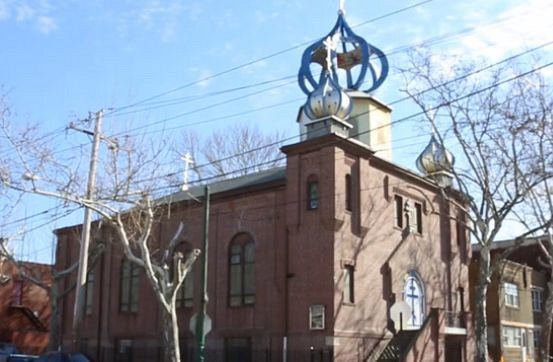 The parish of The Assumption of the Holy Virgin Russian Orthodox Church is located at its original site, 28th and Snyder Avenues in South Philadelphia.  Our Founding ancestors were mostly Carpatho-Russians from the former Austro-Hungarian Empire.  They immigrated to the Unites States during the period known as the Progressive Era.  This wave of immigration started roughly around 1880 and lasted until the beginning of World War I (1914).  These “newer immigrants” brought a strong religious affiliation with them.

Through 1913, the majority of parishioners were members of the Ruthenian Uniat Church, while few belonged to the Orthodox Church of Philadelphia.  It was mutually recognized that discontent and frustration existed within the Churches.  Thus, it was on January of 1913, that thirty-nine laymen arranged a meeting with Reverand Father J. Krohmalny.  This gathering resulted in the formation of a new parish, The Assumption of the Holy Virgin Russian Orthodox Greek Catholic Church, with Father J. Krohmalny serving as our first pastor.  It was decades later that our church, along with many others, came under the jurisdiction of the Orthodox Church of America, autocephalous from the Mother Church of Russia.

Early church records, being written in the language of our founders and thus difficult to translate, do not allow for a truly accurate history of the parish.  Many parishioners recall stories of their parents mortgaging their homes to help raise the money needed to purchase the parish property and to build the church.  It is known, however, the first officers elected to parish council were President William Kavalkovich, Vice President John Lapihuska, Secretary Michael Kavchok, Treasurer John Obrazik, Trustees John Brasko, John Homa and Andrew Harhay, Committee Members John Masiko, John Kavalkovich, John Mohanach, Andrew Brasko, Vasil Burch, Peter Lipchak, and Sexton George Pavlik.

It was in 1963, the year of the Assumption’s Golden Jubilee, that a new Iconostasis was donated by the parish’s Ladies Auxiliary in commemoration of this milestone.  Through dedicated hours of sponsoring bake sales, rummage sales, Christmas bazaars, panics, and other fund raising activities, the women succeeded in raising the $11,500; the total cost of a new Iconostasis, which still adorns our church today. Soon after the Iconostasis was installed, our parish was very fortunate in commissioning the world renowned iconographer, Mr. Matthias Von Reutlinger.  Durning the next several years, Mr. Von Reutlinger adorned our church with seventy original icons.  As an added not of interest, each one of these icons was donated by either a family or a member or a member of the Assumption of the Holy Virgin Russian Orthodox Church, rather that by an organization within the parish or through contributions from businesses associated with the church.

Upon his death in 1985, our parish was privileged to receive one last Von Reutlinger icon.  This gift from beyond the grave, is a large unfinished icon of the Temptations of Christ.  According to the wishes of Mr. Von Reutlinger, it shall remain unfinished, and is displayed in the Pastor’s office.  Even in its primitive sketchy state, the icon revels in beauty and strength, promoting spiritual contemplation and thought.

During the period of time between the installation of the existing Iconostasis thru the completion of the seventy icons, nature slowly weathered the old copper cupolas atop our place of worship.  A final windstorm caused irreparable damage.  In 1973, the present “rib-type” cupola was erected upon the church rooftop.  It’s distinctive style, in addition to the sun casting a gleaming shine upon the brilliant gold and blue, attracts the eye of those traveling along the nearby expressway.  Very often visitors are drawn to our parish, if only to admire the unique structure.

As the years slipped by, many of the founders and older parishioners of the Church fell to eternal rest.  The younger generation was given the challenge of keeping unified through changing times.  Various organizations within the Assumption of the Holy Virgin Russian Orthodox Church began to diminish in number.  In some instances, such as with the “R” Club and the Ladies Auxiliary, the groups went inactive.

However to drive to survive and to preserve what our parents and grandparents struggled so hard to build was never lost.  In 1981, a new Ladies Auxiliary, St. Sophia’s Sisterhood, was established.  Although small in number, through hard work and many hours, they have shown devotion in their efforts to help with the beautifying and restoration of the Assumption of the Holy Virgin Russian Orthodox Church.  They sisterhood is credited for several major projects, including the repainting of the distinctive cupolas and a new parish roof.  Additionally, the have donated banners and other church articles.

Within many urban parishes children grew up and relocated outside of South Philadelphia along the lines of the new super-highways.  Parishioners now live in numerous counties throughout Pennsylvania and New Jersey.  Also, the membership of the Assumption of the Holy Virgin Russian Orthodox Church has become more diversified, coming from a variety of ethnic backgrounds.

We ask God to give us strength and wisdom to continue to build upon the strong foundation they laid.  We ask God to bless our church with a long and healthy future of praising His Holy Name, working for continued growth of His Kingdom, and doing His will in all good things.

Monthly Panikhida: 1st Sunday of the Month (after Divine Liturgy)

Bible Study: 2nd Tuesday of the Month (In-Person and Zoom)

We are now on Amazon Smile!

Anyone who is purchasing from Amazon, please support our parish.

Amazon will donate 0.5% of the price of your purchase.

Thank you for all your support!

The Mission of The Orthodox Church in America, the local autocephalous Orthodox Christian Church, is to be faithful in fulfilling the commandment of Christ to “Go into all the world and make disciples of all nations, baptizing them in the name of the Father, and of the Son and of the Holy Spirit…”

Holy Assumption Orthodox Church is part of the Diocese of Eastern Pennsylvania, which is presided over by The Most Reverend Mark (Maymon), Archbishop of Philadelphia and Eastern Pennsylvania. Our mission is bringing the joy of Christ's resurrection to those who have never heard the Good News, and to strengthen and encourage the faithful who reside within Philadelphia and the local area.

The Holy Scripture is a collection of books written over multiple centuries by those inspired by God to do so. It is the primary witness to the Orthodox Christian faith, within Holy Tradition and often described as its highest point. It was written by the prophets and apostles in human language, inspired by the Holy Spirit, and collected, edited, and canonized by the Church.

Holiness or sainthood is a gift (charisma) given by God to man, through the Holy Spirit. Man's effort to become a participant in the life of divine holiness is indispensable, but sanctification itself is the work of the Holy Trinity, especially through the sanctifying power of Jesus Christ, who was incarnate, suffered crucifixion, and rose from the dead, in order to lead us to the life of holiness, through the communion with the Holy Spirit.